If you have live or dried mealworms hanging around the house you can actually use them for fishing. Using grubs or worms is one of the simplest ways to fish but it’s also one of the more effective ways. Live ones are always going to be the best option but dried ones will still do the job.

What kind of fish can you catch with mealworms? Most fish will eat mealworms but the most common thing you’ll catch with them are bluegill, trout, perch, bass, crappie, and sometimes catfish. These are a great thing to fish with throughout the year because it’s what the fish are already eating. They also seem to work really well for ice fishing because they’re an easy meal that fish don’t have to chase.

Mealworms are quite small so you’ll want to use a small hook. You’ll want to fit as much of it on your hook as possible because the fish will pull it off if it’s hanging. The best time of year to fish with mealworms is probably early on in the fishing season. You can catch fish with them all year round but early on is when they get hammered.

What is the difference between mealworms and waxworms?

Both of them can be used to catch trout, panfish, bass, and whatever else could be swimming around. You can buy them both online (dried or live) and I’m sure you can find them at your local tackle shop. I wouldn’t say either of them is better than the other though.

Can dried mealworms be rehydrated?

If you have dried mealworms, the good news is that you can rehydrate them to make it easier to slide on your hook. It’s obviously not going to be the same as a fresh one but it’ll still do the job. Here’s how you rehydrate them:

Which is better mealworms or Superworms?

The main difference between mealworms and super worms is length and texture. Superworms are quite a bit longer than mealworms and their shell is going to be harder. They are both quite similar but I prefer using mealworms for fishing (especially the giant ones). 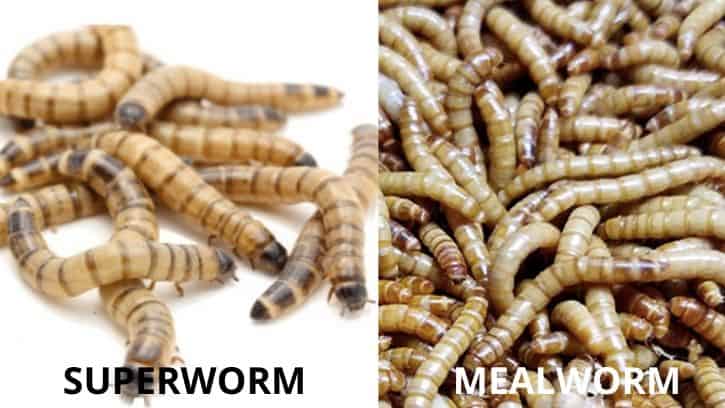 Superworms are harder to deal with because they’re tougher and can actually bite/sting. I don’t want to deal with that so that’s why I’d stick with mealworms. They’ve actually modified some of the genes to delay the hatching process (whatever it’s called) and that’s what makes them longer and thicker. Try to find those if you can (called giant mealworms).